Home » Mobile phones » Why are Chinese manufacturers like Vivo, Oppo, Mi are famous over Indian manufacturing companies like Micromax and Karbonn? 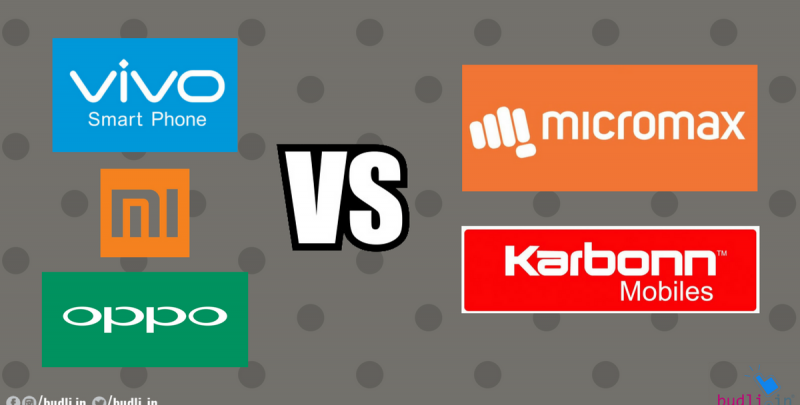 Xiaomi, Oppo, Vivo, Gionee, these are the smartphones brands that you come across nowadays and all of them are Chinese based companies. Did you ever question yourself why a developing country like India is exporting and using Chinese smartphones? Yes, we do have a population of 1.2 million and most of yes are using Chinese smartphones even when we have our in-house mobile manufacturers like Micromax, Karbonn Mobiles, Lava. What made Chinese manufacturers enter the Indian mobile market and what is so special about their products that we became fond of them in a short span of time, let’s find out.

Nearly a decade ago when the first iPhone was released, we still had featured phones in our stores. Later we served as distribution partners for Nokia, Motorola, Sony Ericsson, LG, and other companies. Some of the mobile manufactures then thought of making mobiles in India and started their own companies.

Then came our Indian brands like Micromax, Spice, Lava, and Jaina Group (Karbonn Mobiles), then some companies partnered with Chinese Original Design Manufacturers (ODMs). This is known as the white-labelling deal, here one company manufactures the product and other company puts their name on it. This happened to be a great deal as it resulted in providing Indian market cheaper featured phones than Nokia, Motorola etc. Partnering with Chinese companies was even better as they brought new models into the market more frequently than others. It typically took one year for companies like Nokia and Motorola to bring a new model into the market but these Chinese companies released new models every three months. There began the trend of dumping cheap mobiles in India.

By the end of 2010, India was demanding for new smartphones with better features but the Indian companies invested very little in the research and development despite many requests coming in. Even after that when companies brought new models into the market, they all seemed very similar while public demanded a change. Then came the Chinese manufactures who now were ready to directly enter the Indian market. The companies like Vivo, Oppo, and Gionee started launching their products directly into the market and people also thought that they made better products with better quality and much better features. Chinese companies cashed the public opinion by spending a huge sum on marketing and research and development.

Till then most of the mobiles purchased were offline but later it was the complete opposite. They came up with their own strategies and redefined e-commerce for mobiles in India. They are now expanding their reach to everyone in India by putting up more and more stores as well. The huge cash point for them was the introduction of Jio, as it only supported 4G mobiles and at that point in time India mostly had handsets supporting 3G. So they came up with a variety of 4G handsets and they saw a tremendous growth in their sales.

Be it Indian or Chinese mobiles, people always look for the smartphone which provides them with the advanced features. There is only one place to go if you want the best smartphone – budli.in. Budli has a huge empire of refurbished electronic gadgets and there is no device that you can’t find in it. You can easily upgrade your old smartphone for a better and brand new one and you will also get amazing discounts on your purchase. Head to budli.in to experience effortless and user-friendly electronic shopping.