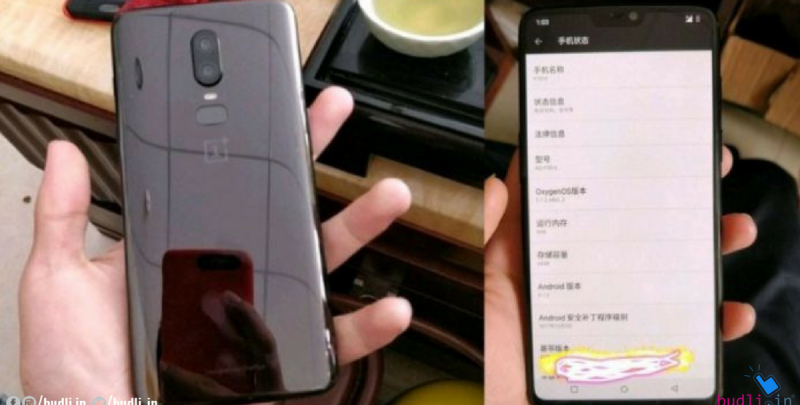 OnePlus is set to announce the release of its latest flagship OnePlus 6 in the second quarter of the year. And it also seems like the company is all geared up for the launch. A leaked image of the new flagship is making rounds of the internet showing off its new design. As the previous flagship of the company, OnePlus 5T recently went out of stock in the US, we can expect OnePlus to launch the next flagship real soon. While we still don’t have any information regarding the release date but from the leaks, we are sure that things are going to be better.

Evan Blass has leaked an image of the upcoming OnePlus 6 and we can see some predominant changes in the handset. The curves of the device may still remind you of the previous ones but the rare side of the device appears to be textured like the manufacturer’s most popular wood-inspired case, but in this device, it appears to be built into the handset. At the bottom of the device, the frame appears to have an offset angle which is quite different from the soft round corners which we usually see.

Once again the company has not disturbed the headphone jack, USB Type-C port, single speaker/ mic grille. Many might be curious to know if it has the iPhone X like a notch or not. But as there is not much information that we can get from the leaks, we will have to wait for some more time to see what OnePlus 6 is really going to look like.

The leaks also reveal that the company has repositioned the rear camera module yo be vertical this time, unlike the horizontal setup in the OnePlus 5T. If the leak turns out to be true, OnePlus 6 users will get rectangular fingerprint scanner at the back above the OnePlus logo, a change from the usual circular scanner found in the previous version.

There was also a specification sheet leak of OnePlus 6 which mentions specifications like a 6.28-inch full-HD+ AMOLED display, a dual rear camera setup ( 20 + 16 megapixel), a 20-megapixel front camera, 3450 mAh battery, 6GB RAM, and 128GB inbuilt storage. It is also confirmed that the OnePlus 6 is going to be powered by Snapdragon 845 processor. As for the pricing, the premium 8GB RAM/ 256GB storage model has been suggested to be priced at Rs. 38,000. However, there is no clear indication of the price of other variants.

Having a high-end new smartphone is what most of the people crave for. The only reason they take a back step is that of the price points of branded new models. Here is budli.in to help you bring home your choice of a gadget. Budli.in is the largest e-commerce site for refurbished electronic gadgets. Budli gives you a very simple way to get your old device refurbished and upgrade to the device of your choice with great discounts. Why wait when you can bring home the best device at an affordable price from budli.in.