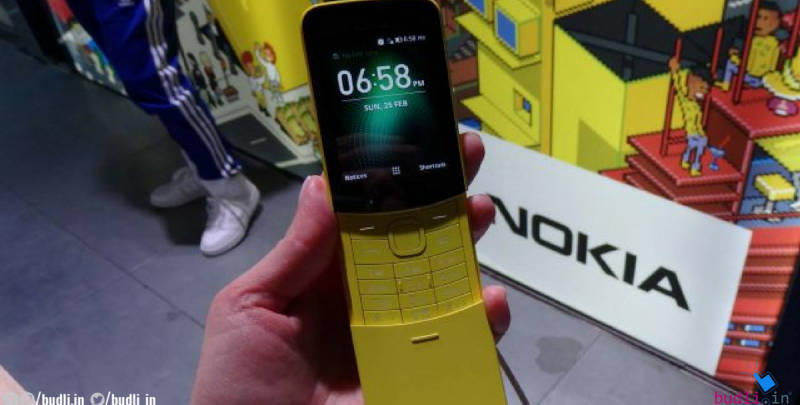 Nokia has recently unveiled their new smartphone Nokia 8110 4G at MWC 2018, which is the successor of Nokia 8810. This flagship called ‘banana’ phone which gives access to apps such as Google Assistant, Google Search, and Google Maps as well as includes a revamped Snake game.

Nokia is planning to give tough competition to Jio mobiles which have around 25 million subscribers in India by introducing WhatsApp in Nokia 8810 4G.

Nokia 8810 4G has reloaded with 4G capabilities so that we can surf, chat and stream faster with 4G LTE. Plus, we can create our own WiFi connection by using a wireless Hotspot feature. This flagship stands out in design. As we know Nokia flagships has a powerful battery life, this flagship has equipped with 1500 mAh removable battery. It has 2.45″ (6.22 cm) QVGA display, curved screen. Flagship comes with onboard 4 GB internal storage, 512 MB RAM and Memory card slot can be expanded up to 64 GB. This flagship comes with 3.5 mm headphone jack and supports audio files formats AAC, AMR, MP3, MIDI, Vorbis

Every three months we find a new smartphone is released. At such a fast pace do you think that the smartphone you bought a year ago is still the latest phone? Obviously no! So do you ever feel like having the latest mobile but don’t know what to do with the old one? Here you have budli.in to solve your problems. Budli is the leading refurbished gadget site in India. At budli, it is very simple to get your old device refurbished and get upgraded to a brand new device. Budli happens to be the best because of its variety of products and the quality of the products. You can be carefree about your budget as well as Budli offer many discounts for you. Get rid of your old device and get your hands on the latest one with budli.in.