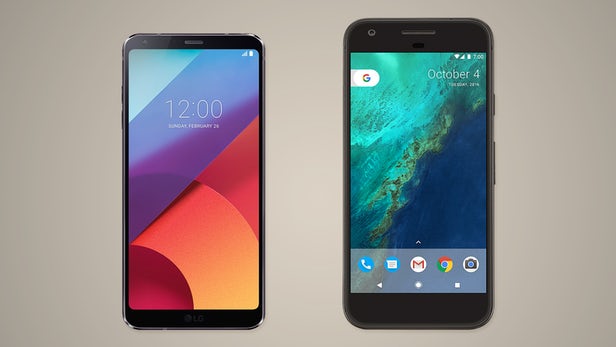 The Google Pixel and Pixel XL which were released last year are still maintaining their position as the best smartphone in the market. But there are reports that this might not continue for long. The LG G6 which was unveiled in the Mobile World Congress this year of 2017 has been talked a lot about for it’s amazing specs, great design and also not to forget the 4K display. All these great factors add up to make the LG G6 a tough competitor for the Google Pixel.

Here is where we compare these two smartphones in each and every aspect.

Both the smartphones have an exceptional design and build quality. The Pixel series smartphones are quite unique with their dual tone back panel and the metal build were the LG G6 has a rather plane glass finish along with the metal build. The bezels on the G6 are very thin than the Pixel smartphone.  Both the devices have the finger print scanner on the back right below the rear camera.

The LG G6 is smaller and lighter than the Pixel smartphones despite of having a larger display. Both the devices sport a USB Type-C port for charging and data transfer.

The Google Pixel officially states that the device is not water proof were as the LG G6 has a IP68 certification for water and dust resistance.

The Google Pixel was known for it’s amazing camera performance. The photos taken on the Pixel are sharp and clear with great detail. But the Pixel smartphones did not have a Dual camera setup. In the case of the LG G6 the device has got the dual camera setup along with real tone LED flash light.

Talking about the camera specifications, the Google Pixel has a 12.3-megapixel rear camera with an f/2.0 aperture, phase detection autofocus and laser autofocus, but no OIS. On the front, the Pixel XL has an 8-megapixel selfie cam with an f/2.4 aperture. LG G6 on the other hand has a dual 13MP cameras with one of these sensors features a 125-degree wide-angle lens that should deliver the same field of vision as the naked eye. One camera has an f/1.8 aperture with optical image stabilization (OIS) and phase detection autofocus, while the other features an f/2.4 aperture without autofocus. On the front, the LG G6 sports a 5-megapixel selfie cam with an f/2.2 aperture and a 100-degree wide-angle lens.

LG G6 has a 5.7 inch QHD display while the Pixel has a 5.5 inch QHD display. G6 has a pixel density of 564 ppi were as the Pixel has a pixel density of 534 ppi, which is lower than the LG G6 (not noticeable with naked eye). The Pixel XL on the other hand has a AMOLED display and delivers colors sharper and brighter than the LG G6 display.

The LG G6 is powered by the Snapdragon 821 chip set along with 4GB of RAM to enhance the performance. Also, the device is coming up with two storage variants – 32GB and 64GB, with expandable memory via microSD. The device is powered  by a 3,330 mAh battery which gives a decent usage for a day.

The Pixel is powered by the Snapdragon 821 chip set along with 4GB of RAM to enhance the performance. Also, the device is coming up with two storage variants – 32GB and 128GB, but does not have expandable memory via microSD. The device is powered  by a 3,450 mAh battery which gives a decent usage for a day.

Both have USB Type-C Ports, finger print scanner at the back, and a 3.5 mm headphone jack.

Not everyone can afford a flagship device, can they? But does that mean that you should give up on your will to use a premium smartphone? The answer is no! We have a solution. No, we will not tell you to buy a second hand smartphone as we know the consequences. We know you have no guarantee on that product, we know that you might not even be getting a fully functional device. So is there no way to fight this problem? There is a solution. Refurbished smartphone is the best solution. With refurbished smartphones you get an amazing quality product provided with guarantee, and is also in full working condition. The best part about using a refurbished smartphone is that you get the same quality product as the new one but a price which you can never think of.