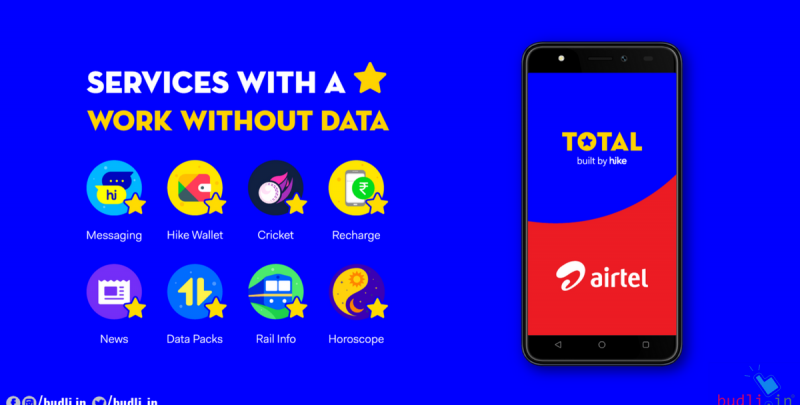 Indian messaging app Hike has released a new service called Hike Total. This new platform will enable the users to access the hike messenger and other services without an active Internet connection. This service lets Android users in India transfer money to any of their contacts and also allows users to read the news, chat with their friends and book train tickets without any active internet connection.

In this post, I’ll tell you everything you need to know about Hike Total.

Hike has 100 million users on its platform and has been working on Total with an aim to make basic services available to people without any active internet connection. Hike’s CEO, Kavin Mittal explained that there are around 400 million smartphone users in India, and about 200 million of them don’t have access the internet as often as others do( in some cases they don’t have an internet connection at all) – even though the mobile data in India is cheaper than almost anywhere else in the world. With Hike Total, there is an opportunity to reach 200 million and more people who don’t access the web.

Hike Total is a customized version of Android which is being brought to reality in order to enable the users to use certain services without an active internet connection. A few elements of the Operating System has been changed by the Hike Total Team, by which they able to control the user experience in ways that wouldn’t be possible.  “We’ve taken Android, and we’ve added a few things, and we’ve modified a few things,” Mittal said at the launch event.

With Hike Total, we have access to the services like Hike Messenger, News, Cricket, Horoscope, Rail info, Recharge, and Hike Wallet. In future, Astrology, Bollywood, Cricket and Devotional services would also be added said by Kavin Mittal. Hike Total works by using a bunch of USSD codes to enable the services provided by Hike without an active internet connection, but it uses something it calls UTP (Universal Transfer Protocol).  USSD makes communication more efficient and secure.

As of now, Hike Total will work only with a few operators like Bharti Airtel, Aircel, and BSNL to begin with, although Mittal confirmed that Hike is looking to get other telcos on board as well. Hike counts Bharti, Tencent, Foxconn, Tiger Global, and SoftBank among its investors.

If you are someone looking for a place to upgrade to the latest device then you are at the right place. The best place to get your devices upgraded is budli.in. budli is India’s largest online store for refurbished electronic gadgets. It has a wide range of products form all the leading brands in the market. It happens to be the most preferred site as it offers discounts on most of the products. Hurry! Get your device from budli.in today.