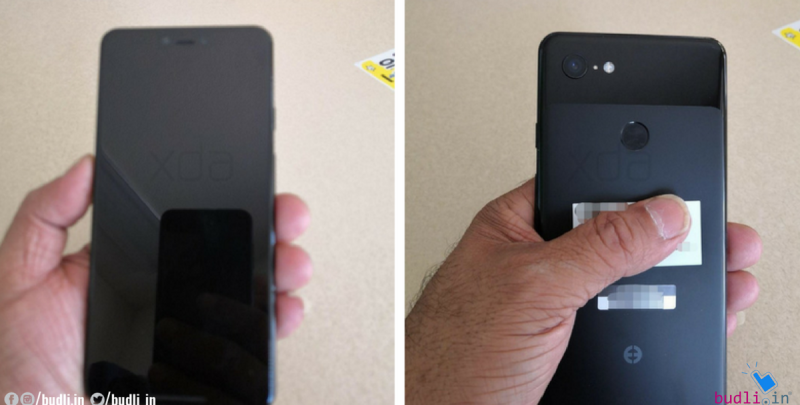 Google probably manufactures one of the best devices in terms of build quality and also incorporates the latest features in it. The Google 3 series has a lot of time to come out in the market, probably in October of this year, but before that, we do have a lot of rumours and leaks about the device. Exactly a week ago there were leaks surfacing online revealing the physical appearance of the device. These leaked images show that the upcoming Google Pixel 3 XL will have a notch display and dual front camera lens.

The live images of the Google Pixel 3 XL were leaked by XDA Developers and these images tell us a lot about the device’s appearance. The images of the device are seen to have the fingerprint sensor, dual front-facing camera sensors, and speaker placement. The images also show the device sporting the famous notch display. From the images, it is also clear that it will have 4GB RAM and 128GB storage with Snapdragon 845 SoC.

Similar to the previous generation Pixel 2 XL, Pixel 3 XL will be having the 3.5mm audio jack and the volume and power buttons positioned like the previous generation devices. Pixel 3 XL will have front-firing stereo speakers similar to Pixel 2 XL. The fingerprint sensor also remains on the back side of the device. At the bottom, you will only find the USB type-C port.

The dual rare camera setup is becoming common in all the flagships but Google has still struck to its single rear camera setup. Surprisingly the device will feature dual front cameras according to the leaks. The device is also seen to have a glass back but we are not quite sure if there is support for wireless charging. The Pixel 3 series will be powered by the Qualcomm Snapdragon 845 with a 4GB RAM and 128GB storage. This device is supposed to come into the market in October this year and the company is also planning to release a mid-range pixel smartphone later in 2019.

If you can’t wait till then, and you need the latest smartphone right away at the best price then you need to check out budli.in. Budli is a leading e-commerce site for refurbished electronic gadgets. The choice of devices at budli.in will surely blow your mind. The best thing about budli is that you get the device at a very low price compared to elsewhere. Don’t be late, go grab your desired device from budli.in.