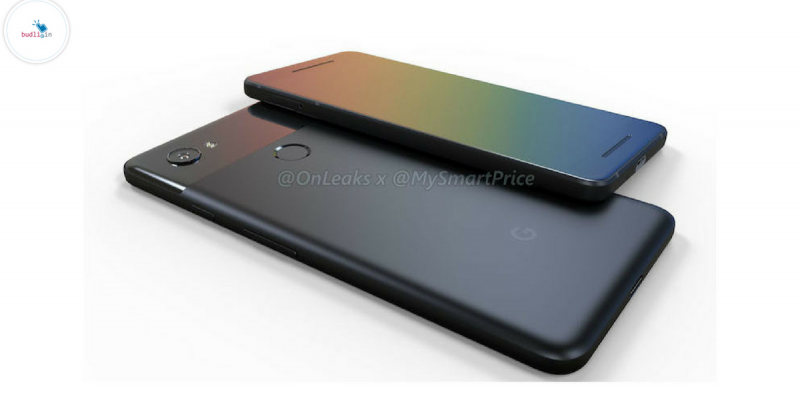 Google’s first official smartphone under its own brand name was the Pixel and the Pixel XL. Both the devices were launched last year and received a huge response from the customers. Despite being a very premium device these smartphones have managed to turn the heads towards them with their performance and camera quality.

Now, it’s time for the second generation of the Google devices. The render leaks are finally here. The smartphones sport thinner bezels, and there’s no sight of the 3.5mm audio jack as well. Check out the image above for a better look!

The leak was made with courtesy to OnLeaks and MySmartPrice. The camera seems to look like to have a new bump of its own along with the flash on the side of it. The color seems to be black with a metallic body. Same as the previous generation of the Pixel, the new one also sports the finger print scanner on the back on it.

The Google logo can also be seen just like the old version. The back design style which is unique to Pixel smartphones only is not changed. The smartphone has ditched the 3.5 mm headphone jack as seen in the render leaks. That space of the headphone jack is used by the Pixel’s stereo speakers.

The SIM tray slot is seen on the left and the Pixel 2 and Pixel XL 2 are rumored to feature a 4.95-inch full-HD and 5.99-inch QHD displays. Both the displays are manufactured by LG. The smartphones might sport a 4GB RAM and 64GB and 128GB of internal storage just like the previous generation of these devices.

A tipped feature is the presence of ‘Always On’ display mode and a “”squeezable”” frame which was seen of the HTC U11 earlier.

Can’t afford a Google Pixel? Don’t worry! You are not alone. Most of us can’t! The price of the previous version of Pixel mobiles was more than Rs 64,000 and that can possibly go up with the release of their latest devices this year.

Does this mean that you should give up on your dream on owning a flagship device like the Google Pixel or the Samsung Galaxy S8? Hell No! We have a solution for you.

The older versions of these flagships are not actually old. They have the features that most of the smartphones that are being released recently do not have. The flagship mobiles usually add a few extra features every year with new releases. So owning a previous generation flagship device is also great. But the problem is that the prices of such previous generation flagships are also not low.

Then what is the solution?

Changed your mind now? Thought so!

We budli.in are the leading marketplace in India for refurbished products. We have a huge inventory of products ranging from smartphones, tablets to laptops which you can grab on the go. Head over to budli.in now and find your next best gadget.