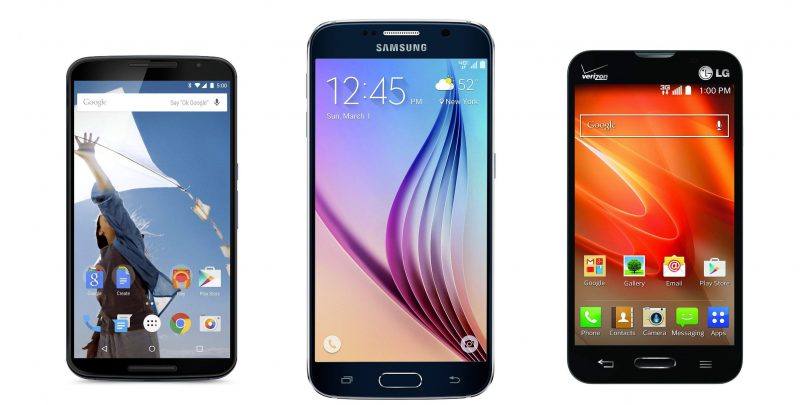 This happened before the Galaxy Note 7 disaster took over the company’s reputation. Known for it’s uber cool design and unmatched specifications, this device is the attention grabber for tech lovers. The build quality of these devices is the best of Samsung and the battery optimization is truly applaudable.

Google finally decided to start it”s own brand of smartphones – Pixel series. This was followed by the release of two smartphones from Google – Pixel and Pixel XL. Both the devices were taken very positively by the people all over the globe. This smartphone is known for it’s ultra smooth handling and amazing camera quality. Both the models come in two variants with different storage capacities and RAM. This makes it one of the best choices to make.

Apple came in with its iPhone 7 into the market in the October of 2016. As always, the new iPhone was highly appreciated for it’s camera performance and build quality. We need not specify much about the security of the Apple products. Also, the new color variants that came into the market recently also acted as a added advantage.

The dual camera smartphone which is giving in some amazing picture quality no less than a DSLR. This is due to Apple’s efforts put into building the camera for the new iPhone. As an addition to all the features that are similar to the iPhone 7 and 7 Plus. The 7 Plus has another added advantage over the 7 and that is the larger display. It has a 0.5 inch larger display than the iPhone 7.

Just a couple of months after the Oneplus 3 release, the company decided to come up with it’s new Oneplus 3T version. There were only a few factors that were different in the Oneplus 3 and 3T and those were the chip set and the larger battery in the 3T. The Oneplus 3T has a 6GB RAM which makes the usage as smooth as you could possibly think off.

This is one of the flagship devices that came up last year from HTC. The HTC 10 is known for its build quality and 4GB RAM which gives a smooth usage of the phone. Also, the OS is fuss-free.

One of the most sold smartphone in the premium price range in India last year is the Oneplus 3. This is due to one major factor and that is it’s performance optimization. The larger battery capacity, the better display, and dash charging. Dash charging is a unique feature of the Oneplus 3 that enables a device to be charged for a days usage in just 30 mins.

Yet another great piece of technology from Apple. The iPhone 6S was released in 2015. But it’s sales saw a hike in the early 2016. Which makes it a honorable mention in this list. The 6S was very well known for it’s amazing large display and the camera quality.

This smartphone of the Nexus series which Google usually does in partnership with different manufacturing companies came up with the brand – Huawei. The Nexus 6P was also released in the year 2015 but is a amazing piece of technology which almost received no flaw reports from the reviewers and the customers.

We know that these are flagship devices and that means that they are prized heavily. But this doesn’t mean that you cannot use a flag ship device. The better option in such case is refurbished phones. We at budli.in have a huge inventory of refurbished products. Head over to budli.in and check them out.